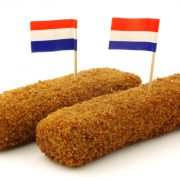 Did you know that such a ‘typical Dutch’ thing like the ‘kroket’ is not originally from the Netherlands?

was invented in France in 1705 for King Louis 14th

became a true Dutch snack since 1950 (Herman Kwekkeboom and Aart van Dobben) and can be ‘pulled out of the wall’ in many places in the Netherlands.